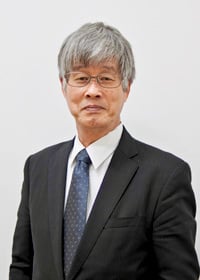 "Autonomy" "jiima" "life, generosity (consideration), feeling of thankfulness"
Is concerned with a new coronavirus infectious disease sixth wave now; "prevention of spread the emphasis measures" were canceled, but, in Fukuyama-shi, as for the number of the infected people, the situation of the hovering high still continues. In last year, is great for our everyday life and school education; affected it, and cancellation and the reduction of each school events including the memorial festival bazaar were held, and was forced by changes to the enforcement of the foreign countries school excursion. It seems to be one year to judge it carefully such as school events while standing on the trend of the infectious disease in this year.
In addition, the invasion in Russia in Ukraine plunges people desiring peace of the world into fear and anxiety. In the Hiroshima parish, "joint prayer to dedicate Russia and Ukraine to the Holy Mother, and to wish for peace" was carried out on March 25. Load it with a request, "can regain the days when is involved in war continuing in Ukraine, and a hand of the support that is necessary for people forced to life as an evacuee in unbearable pain and anxiety is held out, and is peaceful." in our school, "Ukraine humanitarian support is raising funds.
On 16th, an earthquake with a seismic intensity of 6 occurred in Miyagi, Fukushima in March, and the Shinkansen derailed, and more than 2.2 million houses were hit by a blackout, and the holy life of four people was robbed of it, and an injured person appeared a lot. I will guess that all of you suffered from by the Great East Japan Earthquake are uneasy with a white night having been spent for fear.
Based on such situation, I give the following prayer.
"You look back upon a fight and violence happening all over the world, all people who died for new coronavirus infectious diseases again, and please give me everlasting sabbath. In addition, please support the bereaved who lose close people, and are at a loss with comfort, hope to live."

Well, for the postwar confusion period, four sisters do the next fortune from France, and our school is the Catholic school where I drop one kind through indescribable many difficulties and trouble in the ground of this Fukatsu who was a one side wheat field in a country different in a language, manners and customs, a custom, the culture and was founded a school.
"Most necessary one for present Japan was founded a school by mind of the study-based for the education of the woman who carried the cause, the future of the strong faith that was girl education" by "Women for Others" (upbringing of the woman living for others), and ticked away history in 1974 until today, and, as for the number of the graduates, it was a little over 10,000.
The graduate who left our school plays an active part in not only Japan but also all parts of the world as politics, economy, broadcast, the center of the field to further cross to many divergences such as medical care, a judicial officer, a bureaucrat, education, art until now.
It is stated the Pope, "the wonderful gift called the life is the present which we were given for the first time." until now. We will promote education from now on while succeeding to the mission as the Catholic school flowing ceaselessly about the importance of an important life given, the irreplaceable life.

[thanks]
Be always pleased. Pray consistently. Appreciate anything. This is what God expects from you in Christ Jesus.
(letter one five chapters 16-18 to a believer of the Thessalonians)
In addition, poetry called (Susumu Kono) "putting" the front entrance of our school on the place where I entered is handwriting and is admitted.
Institute of educational foundation Fukuyama Akenohoshi
〒721-8545
3-4-1, Nishifukatsucho, Fukuyama-shi, Hiroshima
TEL.084-922-1682 (academy direct communication)
FAX.084-925-1533 (academy direct communication)