2020-10-03
On October 1, I went to Minoshima to dig a potato. The kind of the potato of this year is delicious even if I eat with "Beniharuka" immediately.
From the day before "will be a country bumpkin excursion tomorrow." "kakobai wanakucha -!" I was looking forward to "the big potato very much with kutsu ruzo - ‼".
It rained on the day before and was worried, but of one or the excursion weather that praying touched of all it became fine.
If wear it in a field, and is going to dig itesaa potato, "is eek ...! The girl of a lizard and the uproar.
It is "somewhere!" and the boy who is going to catch it on the side. There were various kinds since before having dug this, but the children dug it with own hand hard while enjoying the touch of the soil.
Some soil were soft, and a lot of own children who dug all it by hand were thanks to rain.
I spread a seat in the garden and had lunch and snacks after I returned to the garden.
The children enjoyed a special day. From the next day, it is potato rice, a sweet potato, the potato tempura in a lunch promptly…I transformed myself into nadooishisona dishes and entered. 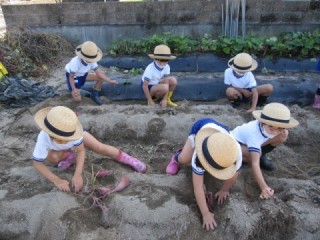 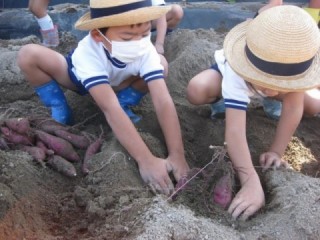 I dig it in cooperation with a friend. 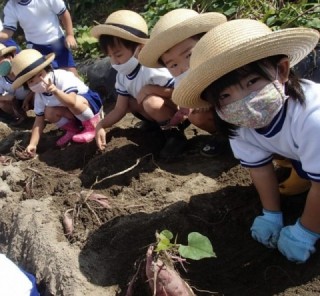 I saw it, and a potato came out!

I was able to dig a big potato!

I ate a lunch with the friend of the class in a garden.

It was delicious when I ate outside.